Despite Snowstorm Pax, delayed school openings and relocation of the event during lunch due to a leak, the 18th Annual Sports Law Symposium took place on February 14, 2014 and was a great event!  The keynote speaker was Joseph Collins, Counsel for the New York Yankees. 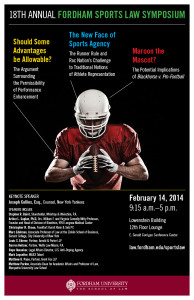 The three panels were:

Panel 1 – Should Some Advantages Be Allowable? The Arguments Surrounding the Permissibility of Performance Enhancement

This panel will examine the abuse of performance-enhancing substances by athletes, drug regulation, and accompanying relevant issues within a variety of professional sports. Performance enhancing drugs continue to be a major problem in many sports, and have recently come to a head in both Major League Baseball and the world of cycling. Critical problems accompanying the use of performance enhancing drugs include unfair athletic advantage, financial gain, and health or addiction risks. However, performance-enhancing drugs can result in a more exciting, though less “authentic,” experience for fans; notable athletes who experienced broad public success while doping include Lance Armstrong and Mark McGwire. This panel will explore the regulations surrounding performance-enhancing drugs across select sports, and debate whether the regulations should be altered to permit the use of some forms of improvement.

By way of example, many professional athletes are barred from using creatine and beta-blockers, drugs available and regularly used by non-athletes. During the Olympics, even aspirin is banned. However, some forms of performance enhancement, such as laser eye surgery, are unregulated, tolerated, and even commonplace. This panel will debate (a) the relative merits of legalizing drugs for athletes readily available to the average individual, in both professional sports and the Olympics, (b) where lines should be drawn on such regulations (for instance, when the drug may be physically unsafe, such as Human Growth Hormone) and (c) what punishments for athletes who use performance enhancing drugs is appropriate. Additionally, the panel may discuss whether criminal ramifications should attach to use of drugs categorized as “banned” even in a more relaxed regulatory structure.

Panel 2 – The New Face of Sports Agency: The Runner Rule and Roc Nation’s Challenge to Traditional Notions of Athlete Representation

The entry of Jay-Z and Roc Nation into the sports agency industry has shaken the field and exposed a wealth of broad concerns. Jay-Z’s ability to lock in major clients with very little active recruitment, reputation, or credibility throws a wrench into the small group of well-established agencies who represent the majority of professional athletes athletes. While Roc Nation’s connection to CAA adds legitimacy, members of the agency and Jay-Z himself have been accused of violating the “Runner Rule” stating that only certified agents can recruit players. While the NBA Player’s Association certified Jay-Z, organizations like the NFLPA have been far more suspicious. This panel will examine the status and potential change in strategy of agencies representing top-end clients, and the alteration in the market for business brought about by Roc Nation’s entry. Additionally, the panel will discuss the use of certified agents to sign clients, agent ethics, and why the Runner Rule remains relevant. Further, the panel will examine the relevant guidelines governing agent conduct, propose changes to such regulation, and speculate as to the future enforcement of the runner rule in sports agency.

Panel 3 – Marooning the Mascot: The Implications of Blackhorse v. Pro-Football

Recently, a new plaintiff revived the previously time-barred suit alleging that the Redskins trademark is so insulting that it cannot be protected by trademark. Many prominent individuals, including President Obama, have openly supported the Blackhorse plaintiffs, categorizing the franchise’s name as overtly offensive. If the Blackhorse plaintiffs were successful, the implications for the organization – and many other teams with potentially unworkable trademarks – would be extreme. Changing the Redskins mascot would be a massive, multi-million dollar undertaking, and risks alienating a broad base of fans. Further, the Redskins would be unable to halt or profit from the sale of Redskins gear, a major revenue generator the organization. Though the Redskins organization has vehemently opposed the change, and a legion of fans remains loyal, the tide of public support has shown a marked trend towards some form of change. This panel will examine whether the Redskins should maintain their trademark, what the implications of an alteration would be, and the industry implications of lawsuits of this nature. This panel could also discuss the trademark issues related in non-contested name or mascot changes, and the results of “rebranding” in professional sports.