Last year was a large stepping-stone for the Forum because we hosted the Inaugural National Basketball Negotiation Competition.  Law students and faculty from across the country came to Fordham Law School to participate, and Forum alumni and friends poured in to judge the negotiation rounds.  Fordham Law School is now one of the few law schools to host a sports law competition, therefore increasing our presence in the sports law community.  Last year’s competition was a huge success and we are looking forward to hosting the event again this spring.

Student enthusiasm for participation in sports law competitions hosted by other schools has also increased here at Fordham.  Forum members continue to be a source of tough competition as they travel to cities such as San Diego and New Orleans.

We are excited to see the continued growth of the Fordham Sports Law Forum, and the dedication of its students to its success.  We are looking forward to what this year has in store!

Thirty-six teams from twenty-six different law schools across the country were in San Diego to compete.  The Competition began on Saturday morning and ran through the entire day as the thirty-sex teams were narrowed to the Final Four.  Saturday’s first two rounds involved an NHL television deal and negotiations regarding players’ concussions. 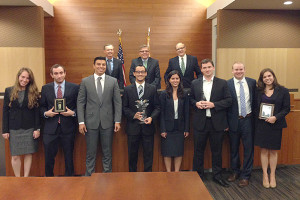 Jessie Friedrich and Mike Antonucci are shown on the far left of the bottom row with the other Final Four teams.

The distinguished panel of judges in the final included TJSL Dean and President Thomas Guernsey, Thomas Jefferson’s Professor and former Dean Kenneth J. Vandevelde, and Professor Rodney K. Smith, Director of Thomas Jefferson’s Center for Sports Law and Policy.  They heard the finalists negotiate their problem dealing with a Title IX dispute.  All three judges stated that they would have happily hired any one of the four teams to represent them in the dispute.  Antonucci and Friedrich turned in a great performance, and finished in Fourth Place.

Due to the preparation and hard work of all four competitors and their coach, Joseph Amoia (Class of 2015), the Fordham Sports Law Forum had its best showing since first competing at the National Sports Law Negotiation Competition.

The panelists briefly discussed their careers and the paths that lead them to the opportunity to practice in sports law.  Each was able to relay to students the best ways to get involved in the practice of sports law.  This included relevant course work and internships.  At the end, the Mr. Klein, Mr. Lee, and Mr. Conniff took questions and made themselves available for one-on-one conversations with students.

Mr. Klein is Vice President at Hiltzik Strategies, a public relations, strategic communications, and crisis management firm. While at Hiltzik Strategies, he has launched a new division charged with content development. Some of Hiltzik Strategies’ clients include the NY Jets, NY Mets and Manti Te’o, as well as non-sports clients like Alec Baldwin, Katie Couric, and Justin Bieber. Prior to Hiltzik Strategies, Mr. Klein worked as Vice President and General Counsel at MAXX Sports & Entertainment, where he was responsible for securing broadcasting assignments for high profile clientele, including athletes, coaches, play-by-play announcers and studio hosts. Mr. Klein was also the Director of Business Development at RLR Associates and an Associate at SFX Media Group. While at Fordham, Mr. Klein was the Editor-in-Chief of Fordham’s Sports Law Forum, a member of the Intellectual Property, Media, and Entertainment Law Journal, and, upon graduation, received the Philip R. Fusco Memorial Award, for his contributions to the Law School.

Mr. Lee founded ALL Counsel in 2009 to offer the same high-quality and personal services to clientele. Mr. Lee’s clients include the NY/NJ Super Bowl Host Committee, MetLife Stadium, the New York Jets, the Miami Dolphins, the Brooklyn Nets, sports and entertainment conglomerate RSE Ventures, and international soccer company Relevant Sports. Mr. Lee played an influential role in the successful bid of the NY/NJ region to host the upcoming Super Bowl XLVIII and currently serves as General Counsel for the NY/NJ Super Bowl Host Committee. Mr. Lee also serves as outside General Counsel for Hiltzik Strategies, a media/communications firm, and artist/film director Julian Schnabel. Mr. Lee has deep experience both as a litigator and as a corporate/transactional attorney, having handled complex litigations and business deals involving intellectual property, licensing and internet-related issues, sponsorships, business formation/start-up, acquisitions and restructurings, human resources, employment issues, antitrust, real estate, ADA compliance and claims, corporate compliance, finance-related issues, and many other things. Prior to starting ALL Counsel, Mr. Lee clerked for a U.S. Court of Appeals Judge, worked for eight years at Proskauer Rose LLP, and served as General Counsel of the New York Jets. While at Fordham, Mr. Lee served as the Writing & Research Editor of the International Law Journal, and he graduated cum laude, with honors including membership in the Order of the Coif.

Mr. Conniff is a partner in Ropes & Gray, LLP’s New York office.  Mr. Conniff is an expert in the field of white-collar criminal and regulatory matters, and has represented coaches in NCAA rule violation investigations, teams before national governing bodies, and national sports organizations with non-profit matters.  Prior to joining Ropes & Gray, Mr. Conniff spent six years as an Assistant United States Attorney in the Southern District of New York.  Among his other professional accomplishments, Mr. Conniff led the team that successfully prosecuted thirty members of the Gambino Crime Family.  Mr. Conniff received his J.D. from Fordham University where he was on the Dean’s List.

The Sports Law Forum plans to send another team of students to New Orleans to compete in Tulane’s National Baseball Arbitration Competition.  Team selection occurred at the end of October, and Hannah Goldman (Class of 2016), Jason Robinson (Class of 2016), and Gregory Uffner (Class of 2016) will be competing this January.   Coaches Amanda Asaro (Class of 2015) and Robert Cohen (Class of 2015) will be working with the competitors to prepare them for this competition, which is a simulated salary arbitration competition modeled closely on the procedures used by Major League Baseball.

The Fordham Sports Law Forum is excited to announce the 18th Annual Sports Law Symposium, which will take place on Friday, February 14, 2014.  The panel topics will include:

If you are interested in writing an article on behalf of the Fordham Sports Law Forum and having it published at the 18th Annual Sports Law Symposium, please email FordhamSportsLaw@gmail.com.

The Fordham Sports Law Forum is looking forward to hosting the 2nd Annual National Basketball Negotiation Competition, which will take place at Fordham Law School on March 21-23, 2014.  Last year at the inaugural Competition, thirteen teams from all over the country came to compete.  Prestigious and experienced attorneys and Fordham Law School alumni judged the negotiation rounds.  The final round was judged by Judge Denny Chin of the Second Circuit; Jeff Gewertz, Chief Legal Officer for the Brooklyn Nets; and Dimitrios Efstathiou, Senior Counsel for Major League Soccer.

If you are interested in participating as a judge for this event, please email FordhamNBNC@gmail.com.  CLE credit is available.

NEW TO THE FORUM

The Fordham Sports Law Forum is excited to announce its NEW BLOG.  Having our very own sports law blog page is new and exciting for the Sports Law Forum, and it is located on this website was created this past summer.  The Forum invites all students, alumni and friends to submit posts!

If you are interested in writing for the Forum, please email us at FordhamSportsLaw@gmail.com and you will be sent more information.