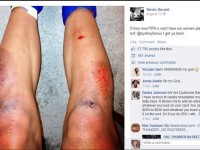 I remember watching the championship game of the 1999 Women’s World Cup (WWC) with my parents, sitting in awe and feeling inspired. For non-soccer fans, it was the game in which United States’ defender Brandi Chastain scored the fifth penalty kick in a shootout to lead the U.S. to victory over China. Perhaps what people […]