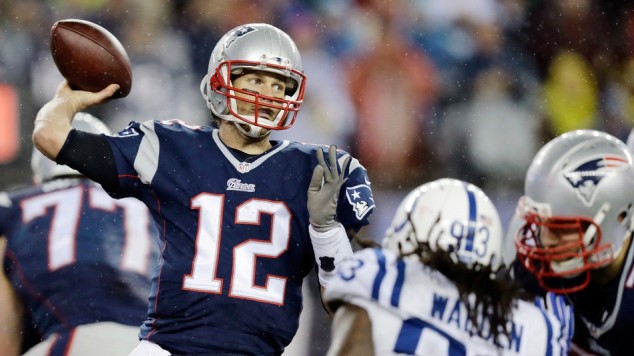 Being an immensely popular and public entity has created serious drama for, and within, the National Football League (NFL).  In what has come to be known as “Deflategate,”[1] the NFL and New England Patriots quarterback Tom Brady, one of its marquee players, have clashed in federal courts for over a year.  After Brady’s initial four-game suspension (for his alleged involvement with the under-inflation of game-used footballs) was upheld by the NFL’s Commissioner, Roger Goodell,[2] the Southern District of New York overturned his four-game suspension,[3] prompting the NFL to appeal the district court’s reversal.  The U.S. Court of Appeals for the Second Circuit held oral arguments on March 3, 2015,[4] with the rumor out of the hearing being that Brady looks to be in trouble, as his suspension may be reinstated.[5]

One thing about the Second Circuit’s review is not in question:  this is not a review to determine if Brady participated in the deflation of footballs.[6]  The Second Circuit’s review is focused on determining if the lower court overstepped its boundary in reversing the NFL’s arbitration decision, pursuant to the NFL’s Collective Bargaining Agreement (CBA).[7]  This is primarily a procedural determination, rather than a substantive one.

This post discusses the district court’s reversal of the NFL’s hearing officer,[8] the Second Circuit’s review of that decision, and the labor law principles that courts generally apply in reviewing a disciplinary decision stemming from a collective bargaining agreement between an employer and a union.  This post concludes with a prediction as to how the Second Circuit will rule on the NFL’s appeal.

Why Is Brady Appealing?

After Tom Brady’s initial four-game suspension was upheld by Commissioner Goodell on appeal, Brady decided to file a lawsuit pursuant to Article III of the NFL’s CBA.  Under Article III, a player may bring a lawsuit against the NFL to challenge the impartiality of the arbitrator in hearing any player’s appeal.[9]

Here, Brady was alleging that the Commissioner was not impartial, as required under Articles XV and XVI of the CBA.  Additionally, Brady argued that he was not provided notice of a possible four-game suspension for such a violation.  Brady also argued that he did not have access to the unfiltered report itself during the appeal hearing, or access to key witnesses involved in the preparation of the report.[10]

Eventually, district court Judge Richard Berman agreed with Brady, and overturned his suspension on September 3, 2015.[11]  Judge Berman decided that the NFL did not meet the procedural requirements in Brady’s appeal, holding that they failed to provide him the requisite notice and access to key information during the appeal process.[12]  The NFL subsequently filed its appeal to the Second Circuit.

What Will the Second Circuit Be Analyzing On Appeal?

At issue in the Deflategate dispute is whether or not Commissioner Goodell’s affirming of Brady’s suspension was in compliance with the NFL’s CBA.  As stated above, Judge Berman ruled that it was not, after Brady argued that he did not have notice of the punishment, and access to the report and key witnesses.  Under the Labor Management Relations Act though, the power to interpret a CBA generally belongs to the agreed upon body as set forth in the CBA at issue.[13]  In the NFL’s CBA, the Commissioner may appoint himself as hearing officer, if he chooses, and is entitled to interpret the application of the CBA.[14]

In hearing a case in which an arbitrator would have already ruled on the issue (which is the case in the NFL because a hearing officer oversees the appeal of player discipline), courts will rarely overturn the decision of an arbitrator or hearing officer.  The arbitration procedural step is mutually agreed upon, and in general labor law, there is a “private association” principle that many courts follow in declining to interrupt a private agreement between parties.[15]  The primary thinking behind this principle is that the agreements between private parties should mean something, and should not be overturned or interfered with.[16]

This “private association” principle presents a dilemma for judges in deciding cases where an arbitrator has already made a ruling.  Although a judge may have a strong opinion in certain cases, they typically are precluded from being able to overturn an arbitrator’s decision.  This is why Judge Berman’s overturning of Brady’s suspension was fairly surprising from a legal perspective.[17]  Many laypeople in opposition of Brady’s suspension were against the suspension because of the lack of concrete evidence against Brady.  Judge Berman did not overturn the suspension due to the evidence presented though; he overturned it due to the procedural steps that were not provided to Brady—notice and access to key information.[18]

How the Second Circuit decides the NFL’s appeal will not be based on whether Brady was involved in the football under-inflation, the evidence against him, or the report itself.  Its decision will be based on whether Judge Berman overstepped his bounds in overturning the hearing officer as set forth in the CBA; and in rendering its decision, the Second Circuit will be applying a de novo standard of review.[19]  Thus, while many people will see this decision as vindicating one of the two parties’ arguments, it is truly a procedural issue to be determined by the Second Circuit, and does not ultimately reveal anything about Brady’s guilt or innocence in Deflategate.

How Will the Second Circuit Decide?

The oral arguments that took place on March 3, 2016, started by focusing on Brady’s lack of cooperation in the initial investigation, and his destroying of his cell phone.[20]  When Brady’s attorney, Jeffrey Kessler, presented Brady’s oral argument, Judge Denny Chin had remarked that “the evidence of the ball tampering is compelling, if not overwhelming[,]”[21] and followed that question up by asking “why the three-judge panel should ‘second-guess’ the arbitration, meaning Goodell.”[22]

Due to the weight that courts have typically given to arbitrators, and the deference they have usually shown them, it was surprising to see Judge Berman overturning the NFL.  As such, it is likely—based on historical precedent and reports of the types of questions the Second Circuit panel asked of Brady—that the district court’s vacation of Brady’s suspension will be overturned.

Even if the Second Circuit rules against Brady, the case can still be remanded back down to the district court, instead of an outright reversal.  Kessler, arguing on behalf of Brady, stated that it should be remanded, because Judge Berman intentionally declined to rule on three alleged missteps by the NFL:  whether Goodell was ‘evidently partial’ by delegating his authority to NFL executive vice president Troy Vincent; whether Goodell unlawfully made factual conclusions that were outside the scope of the Wells Report and Brady’s appeal; and whether Goodell expressing support for the Wells Report after its publication prejudiced Brady’s chances for a fair appeal and thus prevented Goodell from lawfully serving as the arbitrator for the appeal.[23]

An order should be coming in the next few months, which will then shape how Deflategate will progress from here.

Cole Renicker is a second-year law student at Fordham University School of Law and staff member of the Fordham Intellectual Property, Media & Entertainment Law Journal.  Prior to attending Fordham Law School, Cole graduated from Penn State University with a degree in Business Management.

[7] See E. Associated Coal Corp. v. United Mine Workers, Dist. 17, 531 U.S. 57, 67 (2000) (holding that there should be deference to a collectively bargained arbitrator’s decision in construing or applying a contract); Major League Baseball Players Ass’n v. Garvey, 532 U.S. 504 (2001) (ruling that the Court of Appeals’ decision to overturn the arbitrator and decide the case on the merits was at odds with governing law); see also Nat’l Football League Collective Bargaining Agreement, art. XLVI §2 [hereinafter 2011 NFL CBA], https://nfllabor.files.wordpress.com/2010/01/collective-bargaining-agreement-2011-2020.pdf (providing for an agreed upon hearing officer, whose decision is final and binding over the parties, to hear players’ appeals regarding a disciplinary decision).

[8] Under art. XLVI § 2 of the NFL’s CBA, the NFL selects a hearing officer to rule on player disciplinary appeals.  The Players’ Union may suggest, or provide input into the selection of, a hearing officer, but the choice is ultimately made by the NFL.  The NFL Commissioner retains the power to appoint himself as the hearing officer for any particular appeal. See 2011 NFL CBA, supra note 7, art. XLVI §2.

[10] Nat’l Football League Mgmt. Council v. Nat’l Football League Players Ass’n, 2015 WL 5148739, at *11–20 (S.D.N.Y. Sept. 3, 2015).  Judge Berman determined that notice of potential punishments for certain violations needed to be conveyed to the players, and it was not provided to Brady. See id. at *15–16 (“A player’s right to notice is at the heart of the CBA and, for that matter, of our criminal and civil justice systems.”).  Additionally, Judge Berman determined that the Commissioner’s failure to permit Brady to cross-examine material witnesses, and not permit Brady access to the primary investigative files ran contrary to fundamental arbitral procedures. See id. at *16–20.

[17] See Lester Munson, NFL Appeal of Brady Decision Could Lead to Precedent-Setting Court Ruling, ESPN (Sept. 3, 2015), http://espn.go.com/espn/otl/story/_/id/13572474/nfl-appeal-tom-brady-decision-lead-precedent-setting-court-ruling-lester-munson-writes. But see Nat’l Football League Mgmt. Council, 88 F. Supp. 3d at 1090–92.  The difference between Deflategate, and past situations where NFL arbitrators have been affirmed or reversed, is that the Commissioner was the one to hear Brady’s appeal, after having significant involvement in his initial punishment. See generally Nat’l Football League Mgmt. Council v. Nat’l Football League Players Ass’n, 2015 WL 5148739, at *1 (S.D.N.Y. Sept. 3, 2015).

[19] Encyclopaedia Universalis S.A. v. Encyclopaedia Britannica, Inc., 403 F.3d 85, 89–90 (2d Cir. 2005) (“Where a district court denies confirmation of an arbitral award, we review its findings of fact for clear error, and its conclusions of law de novo.”).  The de novo standard of review is the most lenient standard, and makes it more likely that a lower court’s decision will be overturned.