Despite the close scare of Fordham University closing due to Snowstorm Pax, the Fordham Sports Law Forum hosted its 18th Annual Sports Law Symposium on Friday, February 14.  The event started by hearing opening remarks from Dean John Feerick, the Forum’s faculty advisor.  Following this, Joseph Collins, Esq. spoke as this year’s keynote speaker.  Mr. Collins has been Counsel for the New York Yankees since 2011.

The three panels of discussion during the 18th Annual Sports Law Symposium were:

A full description of the panel topics and attending panelists can be found here. 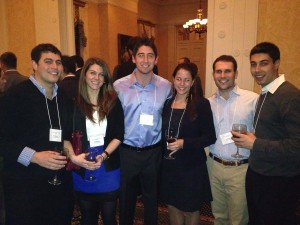 The competition, run by Tulane Sports Law Society, is a simulated salary arbitration competition modeled closely on the procedures used by Major League Baseball.  Like most law school moot court competitions, the competition provides an opportunity for students to sharpen their written and oral advocacy skills in the specialized context of MLB’s salary arbitration proceedings.  The competition is held annually in the early part of the spring academic semester at Tulane University Law School.

This year, as in years past, the competition was modeled off of real arbitration cases.  It required students to argue against or on behalf of a player who was eligible for salary arbitration in 2014.  Fordham represented Josh Reddick against the Oakland Athletics, Eric Hosmer against the Kansas City Royals, and the Atlanta Braves against Jeff Samardzija.

Going into the competition, Fordham ranked third overall out of over thirty-five teams based solely on their brief scores.

Particularly rewarding for the first year competitors were the accomplished judges in front of whom they argued: Nona Lee, Senior Vice President of the Arizona Diamondbacks; Marc Kligman, agent for Carlos Ruiz; and Jay Franklin, agent for Ian Kinsler.  Fordham finished the competition strong, scoring a perfect 100 in its final round.

Congratulations to the new FSLF Executive Board!