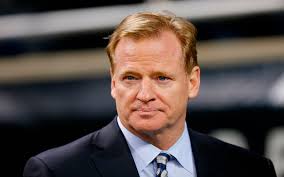 Amidst the firestorm surrounding the Tom Brady “Deflategate” saga and fallout from highly publicized domestic violence suspensions involving National Football League (NFL) players such as Ray Rice, many have scrutinized Roger Goodell and the broad scope of his power as commissioner of the NFL.[1]  Goodell represents the thirty-two NFL owners’ business interests (to the tune of a $44 million per year salary)[2] and has the authority to suspend players for “conduct detrimental” to the team or league, and then act as mutual arbiter in disputes involving the NFL Players Association (NFLPA) and league.[3]  While the NFL touts that penalties and suspensions are made “for the good of the game,”[4] some challenge Goodell for playing the role of “judge,” “jury,” and “his own executioner”.[5]  This blog highlights where the commissioner’s power comes from, his roles and responsibilities, and how a player may challenge the commissioner’s rulings.  It proposes that it is in the NFL’s best interest to limit Goodell’s authority to act as mutual arbiter.

Where Does the Commissioner Get His Power?

The commissioner’s authority is different with regards to the teams and the players.  Whereas Goodell’s authority to govern and discipline the teams is expressly granted to him by the league constitution,[6] the authority to discipline players for conduct offenses is generally limited to what has been agreed upon in the Collective Bargaining Agreement (CBA).[7]  As the CBA functions as a mutually agreed upon document bargained for by the players (via representation by the NFLPA) and league, the players have granted Goodell such authority.  Goodell’s “unlimited powers of adjudication,”[8] was a concession made during bargaining by the players in order to end the 2011 lockout and achieve other health and safety goals including limiting two-a-day practices.[9]  As Deflategate—which involves challenges to Goodell’s role as mutual arbiter under Article III of the CBA—continues, time will tell how the courts interpret Goodell’s impartiality.  In the meantime, the NFLPA may have to wait to equally bargain for the right to limit Goodell’s authority when the current CBA expires after the 2020 season.[10]

A commissioner is necessary to enforce uniform rules and ensure a level playing field.  Without one, there would be no guarantee as to the uniformity and fair adherence to NFL rules.  Deflategate provides an example where Goodell had the authority to discipline the Patriots and Tom Brady for allegedly purposefully under-inflating footballs as it provided a “competitive advantage” on the field.[11]  While the Second Circuit is still deliberating as to whether Brady’s four-game suspension was precedential and made with appropriate advanced notice,[12] it is unchallenged that the commissioner’s has authority to ensure adherence to NFL policies by levying fines, suspensions, and et cetera.

Major League Baseball’s (MLB) collective bargaining agreement is different in a variety of ways, [13] but the MLB’s authority to implement punishments in cases of owner tampering of player trades[14] and player assignments[15] has provided a comparable context of commissioner authority.[16]  In these contexts, federal courts have held that the scope of the commissioner’s authority was broad enough to regulate team and player decisions.[17]  This same rationale has been applied to punishments involving steroid use in the MLB (competitive advantage),[18] and cases involving off the field drug use[19] and domestic violence in the NFL.[20]

While the NFL and NFLPA collectively bargained for Goodell’s power, it gives the commissioner an ability to review his own decisions without third-party oversight.  This differs significantly from the typical arbitration process where a neutral third-party arbiter is appointed by both parties to make a binding decision without preferential treatment to one side.

A player may challenge the commissioner’s ruling in a court of law under the Federal Arbitration Act (FAA),[21] but the U.S. Supreme Court has made clear that “[t]he refusal of courts to review the merits of an arbitration award is the proper approach to arbitration under collective bargaining agreements.  The federal policy of settling labor disputes by arbitration would be undermined if courts had the final say on the merits of the awards.”[22]  While arbitration decisions are given deferential treatment in a court of law, they may be overturned in the event of “evident partiality” on the part of the arbitrator.[23]  “Evident partiality” involves “an arbitrator’s appearance of bias, requiring the arbitrator to disclose to the parties any dealings that might create an impression of bias.”[24]  Courts are reluctant to interfere with private organizations interpreting their own rules, but will intervene in response to “legitimate allegations of bad faith or illegality.”[25]

“Evident partiality” has been the major challenge to Goodell’s decision making, and has been successful in a number of overturned suspensions.  Both the Deflategate and “Bountygate”[26] cases have relied upon the argument made in Morris v. N.Y. Football Giants, Inc.,[27] where the Supreme Court of New York held that the NFL commissioner is not exempt from arbitration requirements, and can lack the neutrality necessary to arbitrate after formerly advocating against the players.[28]  Following an arbiter’s overturning of MLB player Steve Howe’s lifetime ban from baseball in 1992, mutual arbiters place the burden of proof on the commissioner to establish that punishments are “appropriate (and carefully fashioned) given the circumstances and that there is “just cause” for the chosen discipline.[29]

Whereas a typical arbiter’s decision is given broad deference in challenges in a court of law, Goodell’s decisions have been overturned a number of times.  Since 2010, Goodell and the NFL have been overruled in indefinite suspensions (Adrian Peterson),[30] one-game bans (Ndumukong Suh),[31] multi-game suspensions (Ray Rice)[32] and in all of the suspensions of the New Orleans Saints involved in Bountygate.[33]  As courts continue to overturn unilateral player suspensions made by Goodell acting in the “best interest” of the league, the NFLPA and NFL should be driven to revise its current “circular system of justice.”[34]

In fact, it is in the NFL’s best interest to do so to improve the credibility of internal proceedings, consistency of penalties, and to avoid similar gaffes of bad publicity.  As the commissioner’s authority has been overturned in a variety of contexts, it has undermined the commissioner’s authority to implement punishment.  A revised system that grants a truly mutual arbiter (or arbiters) authority would likely ensure that the NFL does not continue to have its authority questioned in open court.  Should the NFL adopt a system like the tripartite arbitration panel used in the MLB,[35] both the NFLPA and NFL could appoint an arbitrator while allowing for a third neutral arbiter to have the deciding vote.  This would significantly limit what has become the inevitable challenging of Goodell’s adjudicative decisions.

Zachary Paiva is a first-year law student at Fordham University School of Law.  Prior to attending Fordham Law School, Zachary graduated from the University of Michigan with a degree in Sport Management.

[10] Alternatively, the NFL and NFLPA could mutually agree to amend the commissioner’s authority prior to the CBA’s expiration date in 2020.  However, the commissioner stated at the NFL Annual Meeting on March 22, 2016, that “[w]e are not close to an agreement by any stretch of the imagination on any changes to that as it relates to third party or other individuals making those decisions.” Cameron McDonough, NFL, NFLPA Appear Nowhere Close to Deal Over Roger Goodell’s Discipline Power, NESN.com (March. 23, 2016, 11:17 PM), http://nesn.com/2016/03/nfl-nflpa-appear-nowhere-close-to-deal-over-roger-goodells-discipline-power/.

[13] As per Article XI of MLB’s CBA, the commissioner’s authority to issue fines and suspensions is shared with the MLB Executive Vice President and Senior Vice President.  Appeals of decisions made by the three executives are reviewed by an arbitration panel composed of an impartial arbiter or a panel of three impartial arbiter.  Major League Baseball Collective Bargaining Agreement 38, 44 (2012), http://mlb.mlb.com/pa/pdf/cba_english.pdf.

[16] See Major League Const. art. II (2005), http://www.ipmall.info/hosted_resources/SportsEntLaw_Institute/League%20Constitutions%20&%20Bylaws/MLConsititutionJune2005Update.pdf (granting the commissioner authority to investigate acts not in the “best interest of the national game of baseball”).

[18] George J. Mitchell, Report to the Commissioner of Baseball of an Independent Investigation into the Illegal Use of Steriods and other Performance Enhancing Substances by Players in Major League Baseball (a.k.a. the “Mitchell Report”), (Dec. 13, 2007), http://files.mlb.com/mitchrpt.pdf.

[33] See Paul Tagliabue Vacates Penalties, supra note 25.  While Roger Goodell recused himself from the appeals panel, the evident partiality of former commissioner Paul Tagliabue was challenged and the case demonstrates the inconsistency of NFL suspensions and the frequency that they have been overturned.

[35] The MLB tripartite arbitration panel allows for the MLB and MLBPA to both delegate an arbiter and the third arbiter to be neutral.  This panel has been utilized in a variety of appeals, notably the overturning of the MLB reserve clause (decision upheld by the Eighth Circuit in Kansas City Royals Baseball Corp. v. Major League Baseball Players Ass’n, 532 F.2d 615, 632 (8th Cir. 1976)).